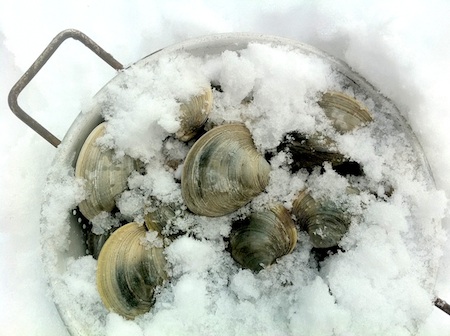 When I spent the first part of this year in outer Cape Cod, it became woefully apparent that I was lacking in the skills necessary to cook seafood. Sure, I cook with fish, but shellfish were completely new to me, since I grew up in a family that didn’t know a mussel from a meerkat. I was getting tired of preparing my old tried and true favorite recipes, and decided it was time to explore the nether-regions of my out-of-comfort zone.

Part of the problem was that I generally prefer to eat my shellfish raw, which, obviously, requires no cooking. Whenever I received a bag full of sweetly sensual Wellfleet Oysters, I’d sit over the sink for hours with my trusty oyster knife (and a kevlar oyster mitt… yikes) and suck them down, one after the other. Easy – no real skill required other than knowing how to shuck an oyster!

When it came to cooking with shellfish, I started in the shallow end; my first attempt was Oysters Rockefeller. It was a smashing success, and I exhausted that recipe over the following few weeks. There were a few nights I made myself terribly ill from consuming more butter than any human being should in one sitting – but how can you stop eating something so insanely delectable as hot buttered and breaded oysters that had been in the water just hours before?

Then Tamar Haspel and her husband Kevin came to visit from their home further inland. They brought with her a huge bag of fresh clams, many varieties of which I’d never seen before. Tamar educated me on the finer points of Cape Cod shellfish, including how to identify, process, and cook with clams. I wish that I could share with you all what I learned that day, but a visual process that would best be served by a video. I’ll see what I can do about that for a future post.

If you’re not familiar with Tamar’s blog, you should be. She blogs over at Starving Off the Land, where she talks about her move from Manhattan to rural Massachusetts, where her and Kevin raise oysters and keep a bevy of farm animals. If you like reading about the adventures of two people who are extremely passionate about knowing where their food comes from, you should tune in.

With the shellfish they brought that day, Tamar prepared one of her favorite clam recipes: Goan Clams, a dish she found on Epicurious. This dish is incredibly rich and flavorful, using some of my favorite Indian spices, cumin and coriander – similar to this Goan Crab Curry by Hank Shaw. I’m a big fan of anything pungent or otherwise strong-tasting, and this dish was full of lovely flavors that you won’t find outside of a well-stocked Indian spice cabinet. Thankfully, I happen to have such a treasure chest in my possession! 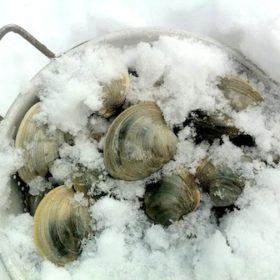 If you like this Indian clam recipe, check out these other others: 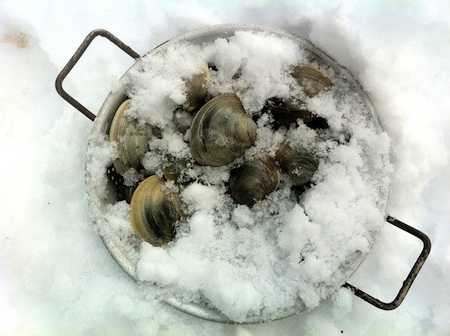