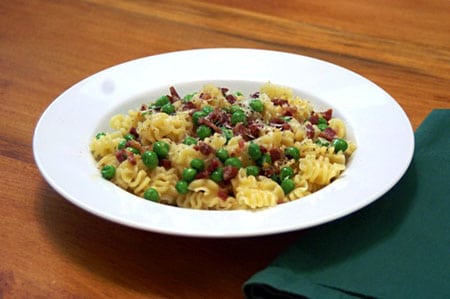 This week’s guest post is compliments of Casey Barber. We’re big fans of ham at Fearless Fresh, as you can see from this Gruyère and Emmentaler Macaroni and Cheese Casserole with Ham and Cubed Sourdough and this Chinese Red-Braised Pork Belly recipe, so we’re really excited to feature a whole cookbook about ham.

I’m one of those weirdos who reads cookbooks like they were Patricia Cornwall paperbacks, who takes to the couch with a blanket, a cup of jasmine tea, and the latest from The Lee Bros. or Barbara Lynch. Tomes of recipes that provoke the Pavlovian drool response, woven together by tall tales and life-experience lessons—man, that’s my kind of page-turner. By these reading standards, Ham: An Obsession with the Hindquarter was a hoot.

Even if you’re leery of taking on a whole hindquarter yourself, authors Bruce Weinstein and Mark Scarbrough pull you in with their instant-BFFs tone. These guys tell capital-S Stories, and are eerily close in temperament to my internal monologue. Is there a Southern gay man inside my head? And the hardcover book design is gloriously done, evoking an early 20th-century small-town newsletter but of course, stylized and well-punctuated with smart tester’s notes and other sidebar tips.

A hilarious, heartfelt and helpful ode to ham

Within this celebration of the diverse uses and tastes of a pig haunch are four sections dealing with variations on ham preparation: fresh, wet-cured, dry-cured European, and dry-cured American. There’s a sweeping array of dishes throughout, from slap-a-sandwich-together (hammy reuben bites (page 92) made with jamon serrano, I’ve got my eye on you) to multi-day extravaganzas such as the full brined and cured hams. But with more than 100 recipes to work through, there’s an opportunity to pick and choose based on your level of commitment. 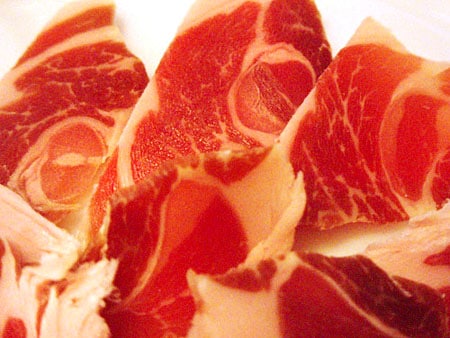 There’s one thing that’s problematic with the topic of Ham: an Obsession with the Hindquarter: ham is not a cheap habit. As a freelancer who reviews books for fun—not profit—a full European Ham Party with a whole dry-cured leg displayed on a custom ham rack might be out of the question for the time being. In the same vein, I’ve got to rally the troops and invite every friend in the Tri-State area before I attempt to wet-cure and/or smoke my own whole ham.

I ended up testing recipes that fed fewer than eight people, the ones that didn’t require a purchase of 12 pounds of ham all at once. The Asian subchapter in the fresh ham section was particularly intriguing, so the Chinese noodles with ham and cashews (page 56) and the Indonesian chile ham saute (page 61) went to the top of my to-try list.

Both of these recipes called for shredding fresh ham (cutting the meat along the grain into matchsticks) and as it turns out, this process was a bit of a pain in my ham end, if you catch my drift. For cooks getting comfortable with breaking down big pieces of protein, it’s a good exercise to explore the meat, get your hands in it and rip it apart to see the muscle placement. But for all the work, the flavor wasn’t overwhelmingly HAM enough in the end to make it worth it. The sauces, however, were slurpable down to the last drop, and the recipes will come back into my rotation with diced fresh ham or maybe even ground pork as a sub-in.

The dry-cured European ham recipes, where Italian prosciutto crudo, Spanish jamon serrano, speck, and other familiar charcuterie wander into the picture, are unsurprisingly winners across the board. It’s hard to hate on jamon serrano-wrapped scallops (page 85), pasta with prosciutto, peas, and Parmigiano-Reggiano (page 99) or prosciutto-wrapped meatloaf (page 119) when they’re tweaked reminders of already-beloved dishes.

If I play my cards right, I might be able to convince my friends who own a big farmhouse (with meat hooks in the property’s barn) that a combination barbecue/ham gorging is on the books for August. But even if we need to wait a few more months, I now have Ham on my shelf as reassurance for the day I finally get there. In the meantime, I’ll keep loading myself up with country ham steaks at the store and plowing through the other 90-something recipes. Just call me a piglet. 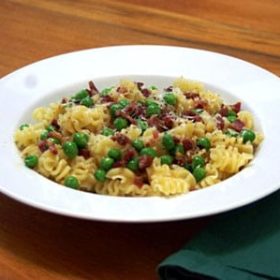 Prosciutto’s price tag often relegates it to “special-occasion food” status, but there’s a surprisingly affordable option that doesn’t skimp on flavor. Check your local Italian market for “prosciutto ends”—the pieces that are left on the leg after the butcher’s wafer-thin slicing has worn it down to the nubbin. These chunky bits can be frozen (meat is easier to slice thin when cold) and keep for about three months. Chop them up as needed for recipes like this one that call for diced prosciutto—and a good deal of it to boot..
0 from 0 votes
Print Pin
Course: Entree
Cuisine: Pasta
Prep Time: 20 minutes
Cook Time: 30 minutes
Total Time: 50 minutes
Servings: 4 servings
Calories: 793kcal
Author: Stephanie Stiavetti