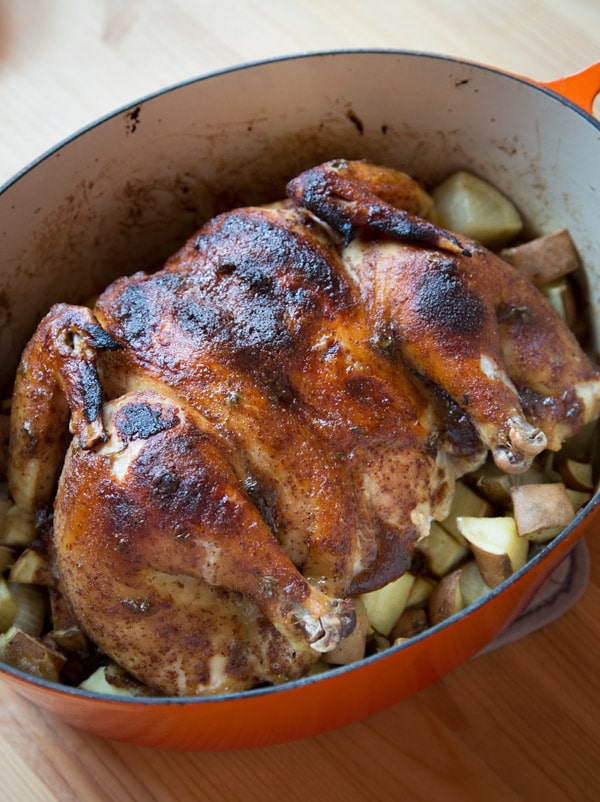 – A mustard chicken recipe that might keep you from jumping off a bridge. Because chicken is magical. –

Snow. Lots of it. Ice on the roads and sidewalks. Gray skies popping in and out of visibility between equally monochromatic buildings and lampposts. If you’re anywhere near the northern and/or eastern part of the country, this is your reality right now. Still bundled up in mittens and earmuffs and wool socks, coat zipped all the way up to your eyeballs, halfheartedly greeting each new day along with the additional four inches of snow it’s brought with it. All of this snow makes me think of one word, and it starts with “F.”

Or are you one of the lucky few out in California who are celebrating each and every 70-degree day that popped out of nowhere this February? Are you aware that it was 90 degrees in Sacramento last week?

Nor am I busting my jeans from all the comfort food I’m stuffing down my gullet to try and maintain some semblance of sanity, while my 5500k therapy lamp burns another few dollars worth of electricity to keep me from pulling a Sylvia Plath and putting my head in the oven. (Before you call 911 and send the cops to my doorstep, that’s hyperbole. But thanks anyways.)

Even for us sugarplum fairies who adore all the moronically frigid charms of winter, the middle of February can suck at a nuclear level. For anyone who happens to be living north of, say, Florida, staring down the barrel of another four weeks of this crap may seem like a life (or death) sentence.

That’s why God made chickens, nature’s depression food. I once had a friend who knew whenever I was suffering from winter depression, because every time she’d call I would tell her I’m roasting a chicken. “That bad?” She’d ask. “Do I need to come out there and save you?” And once she even did come save me, making the four-hour drive from New Jersey to Cape Cod to pluck my sorry ass from the oyster-binging, chicken-roasting bowels of Seasonal Effective Disorder in coastal Massachusetts. (The winter of 2011, also known as “Snowpocalypse.”)

I’m not sure what it is about roasting a chicken that makes me feel better. Or maybe it doesn’t make me feel better. Maybe it’s more of a white flag; an act of surrendering to the lackluster days and nights of an endlessly blank, pleading season, soothing the paradoxically roiling malaise like Pepto Bismol for the soul.

Also, roasting a chicken is a far better idea than gorging yourself on stale grocery store brownies and an entire roll of Pillsbury cinnamon rolls. (Not that I’d know anything about that. Ahem.)

This mustard chicken recipe has all the things you need to temporarily quell the urge to buy the next plane ticket to Hawaii. It’s got brown sugar and stone-ground mustard and sweet potatoes, and I can’t even begin to express the cacophony of epic aromas that will float out of your kitchen about 20 minutes after you slide this bad boy into the oven. I butterflied this chicken because I wanted it to roast faster – butterflying flattens out the bird’s surface area and decreases cooking time. And, I was bored and really wanted to cut something with a new pair of kitchen shears I’d recently picked up.

It’s easy enough to butterfly a chicken yourself. Use some kitchen shears to cut up along the backbone, then remove the spine completely, along with the tail. Or you can ask your butcher to do it for you. Either way works. Once the cutting is done, lay the chicken out flat. This is also a great way to prep a chicken for grilling.

It’s worth mentioning that this chicken has the craziest, crispiest skin I’ve ever had on a roasted bird. It’s salty and crunchy, and just about the best thing ever when there’s nothing happening outside between alternating flurries of white and gray (and white and gray, and more white and gray). It involves very little work to prepare this recipe, so even those beginning home cooks will find this easy to win.

I hope this super easy chicken recipe brings you a little comfort in the dead of winter. And if you’re reading this from California, well, ppttthhhbbbtttttttttt.

Note: Some folks have recently asked for my sealed roasted chicken in a pot, which was originally from Dorie Greenspan’s book. That equally epic roast chicken recipe is right here. 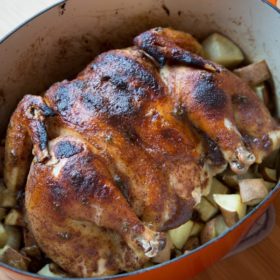