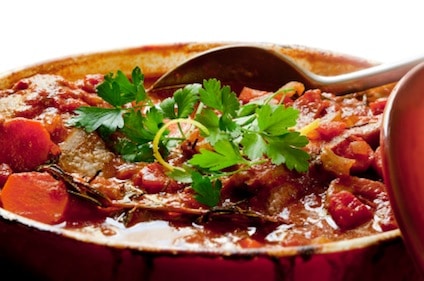 A few years ago I sat down to eat dinner with a friend of mine, a stew she’d spent all day making. She took the first bite. The look on her face was priceless. It was a combination of shock, confusion, and “what the hell just happened??”

She coughed hard, so I took a bite to see what the commotion was all about. Within half a second my eyes started to water and I, too, began to cough.

My friend had added WAAAAAAY too much red wine vinegar. Like, the stew tasted like straight vinegar with little bits of meat and vegetable floating in it. UGH! She was embarrassed, and I felt so bad for her.

With a little backtracking, we found the problem. She’d doubled the recipe and got confused with her numbers. What happened went something like this:

You can adjust ingredients to accommodate a slight mixup, like when you’re making a vinaigrette… but with that much extra vinegar, a quick fix wasn’t going to work.

What we ended up doing was putting the rest of the stew in the fridge, with her plan being to make another double recipe the next day with zero vinegar, combine the two batches, and then freeze an army’s worth for future meals.

Saved! We ended up going out for sushi instead.

What could have saved her to begin with is the Mega Measuring Cheat Sheet, 16 pages of kitchen calculations done for you, so you never have to do math in the kitchen again. Like, ever.

At first, I kind of made this cheat sheet for myself.

I can’t tell you how many times I’ve made mistakes because I’m bad at math… and trying to calculate on the fly, in the middle of cooking, is a recipe for failure (lol). Especially after a long day.

I ended up giving my friend a copy of the Mega-Measuring Cheat Sheet for Christmas, and she hasn’t made a measuring error since. She took this cooking mistake and learned from it. Huzzah!

I hope you’re having a great holiday season!