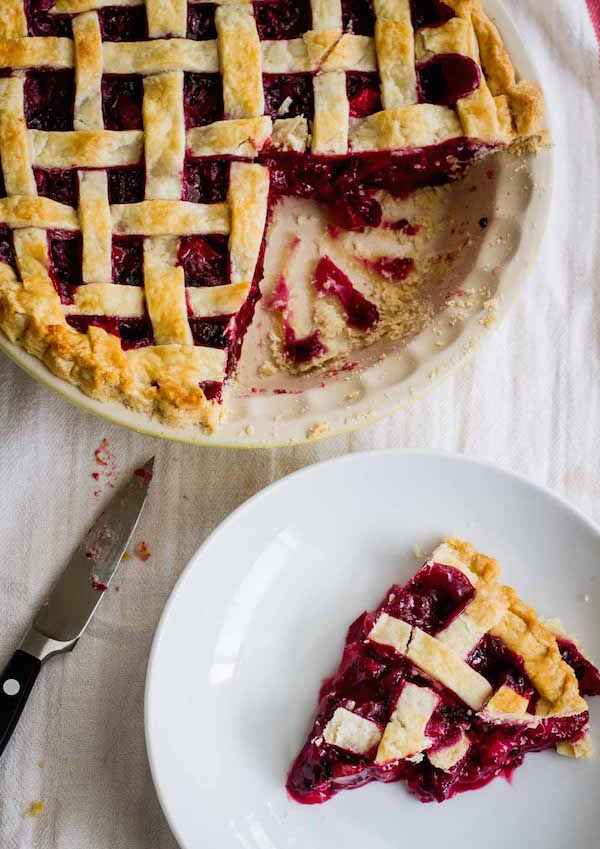 Can I ask you a question? Where the hell did summer go? I’m not really sure what happened, but I woke up this morning and realized, Cripes! It’s almost September! Were I still a youngling, I’d be heartbroken that it’s time to go back to school; but as I’m in my 20th+ year of adulthood, I’m more bewildered than anything else.

I’m a little panicked. I didn’t eat enough peaches while I had the chance! No more tomatoes in the markets! The nectarines will be gone soon! Where the bork did all these pears and pumpkins come from??

To mourn the passing of this summer season – and the halfway point of yet another year – I’ve got a song to share with you. It’s called Autumn Tactics, and it’s a very nice segue into the fall season. I hope you enjoy it.

For as sad as I am to see summer go, I have to admit I’m almost giddy at the prospect of fall. Autumn is my favorite season, with the promise of bitingly chilly weather and warm, fuzzy scarves peeking out from their long hibernation in a box under the bed. That also means STEWS! BRAISES! MEAT PIES! And all the other lovely comfort foods that magically appear in my kitchen once the days start getting shorter.

So no, I’m not grieving for our soon-to-be dearly departed summer. I will miss the fresh fruit, though, specifically my favorite dessert this year: blackberry pie. A brandy-kissed blackberry pie so tart you’re left wondering who gathered your lips into a bouquet and synched them with your tongue.

A few months ago I visited a U-pick farm in Portland, Oregon and relieved them of a bumper crop of blackberries. I came home with six crates of blackberries, for the ridiculously low sum of something like six dollars. Most of them went into the freezer, for that inevitable January day when I’m laying prostrate beneath a full-spectrum lamp, sucking my thumb and begging for anything that at least vaguely resembles a sunny day. Before this gold mine of berries hit the deep freeze, however, I snagged a few handfuls to develop you an insanely tart, ridiculously easy blackberry pie recipe. You’re welcome.

This blackberry pie is special. Yes, it’s easy to make, and yes, it’s full of fruit. But beneath the bracing, brandy-soaked blackberries you’ll find a layer of sour cream custard, spiced with cinnamon and fresh ginger, nipping at your olfactory senses and calling you to faceplant into the pie plate. The whole pie is then topped with a cinnamon crumble, as tender and warm as slow, naked kiss under the goose-down comforter.

And if you’re averse to the drama of chilling, rolling, and fitting infuriatingly fragile pie crusts, then I’ve got you covered. This no-roll pie crust is thrown together quicker than a wink, then pressed into a pie plate without even a sideways glance from your rolling pin.

​​HALLELUJAH. It’s a little known StephFact(tm) that I hate hate HATE making pie crust. I’m old enough now that I straight up refuse. That’s why I love this no-roll crust recipe… there’s no sticky, uncooperative dough, no discovery that every inch of your kitchen is covered with a fine layer of pastry flour. This pie crust recipe is a savior to those of us who wave the white flag after 60 minutes of unsuccessful mucking around with disagreeable crusts. FEH.

Now, if the fresh blackberries in your area have flown south for winter and you don’t find yourself in possession of a freezer full of organic fruit (nyah nyah) feel free to buy a sack of frozen blackberries from the grocery store. A fact about frozen berries: They are often more rich in nutrients than those you buy fresh, as berries grown for freezing are left to ripen on the vine far longer than their cousins bound for the produce section. Berries grown for fresh sales are picked early, to ensure they are more durable for transport. So frozen berries are often deeper, darker, and more supple than fresh berries. Of course, farmers markets are a happy exception to this rule.

Also, while you’re buying frozen blackberries, buy organic if you can. Commodity berries tend to be especially heavily-laden with pesticides to keep their delicate curves away from the jaws of garden creepers.

This easy blackberry pie recipe is my homebound version of a summer stay-cation. Make it now, while the sun is still high in the sky at 7pm, then make it again when the days are two hours long and you’re neck-deep in the quicksand of seasonal affectation. Come January, this pie may very well be your security blanket. And a damn tasty one, at that. 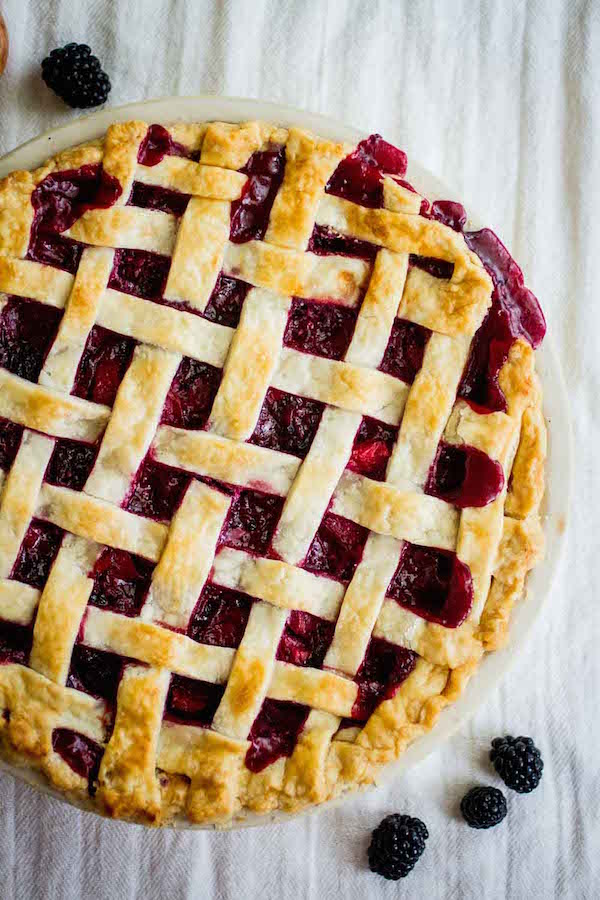 This super easy blackberry pie is a recipe for anyone who wants to try their hand at pie-making. With a no-roll crust and simple filling, this pie comes together with less actual work than most pie recipes. You can even use frozen berries, if you want to make it in the off-season. Frozen berries are often higher in antioxidants that the fresh ones you buy in the produce section, because they're left to ripen on the vine longer than berries picked for fresh sales. The more you know...
0 from 0 votes
Print Pin
Course: Dessert
Cuisine: American
Prep Time: 20 minutes
Cook Time: 1 hour
Total Time: 1 hour 20 minutes
Servings: 8 servings
Calories: 520kcal
Author: Stephanie Stiavetti

If using frozen blackberries, make sure to defrost them first.
You can also use raspberries, blueberries, or mixed berries, if you like. Nutritional analysis does not include sour cream for serving.

Previous Post: « Summertime Macaroni Salad with Chèvre and Grilled Peaches
Next Post: How to Cook Pheasant: Buttered Roast Pheasant with Cream and Bourbon »