How long do I cook pork chops? How can I make sure they’re safe to eat? Can I still keeping a tender, buttery texture I want without overcooking?

These are all GREAT questions. 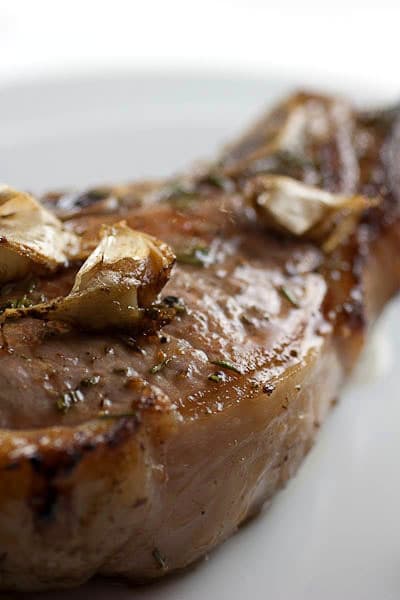 When it comes to cooking pork, there’s a fine line between perfect doneness and the consistency of tack leather (which, seems to be a rite of passage for home cooks, like learning how to make homemade pasta).

I get a lot of questions when my students in the Fearless Cooking Club learn my pan to oven baked pork chop recipe. It’s not hard at all to cook juicy and tender pork chops with your natural instincts. And if all else fails, cheat!

And don’t miss out on how to cook a perfect steak, as well!

Also! If you’re cooking pork or any other piece of meat, you need to know that meat safety is a big issue. I’ve added a free meat safety guide this post, which you can download by clicking the image below.

The basics of cooking pork chops

The truth is that it’s impossible to say how long to cook pork chops for, because cooking time all depends on thickness, how you like your meat, and if you’ve got a bone-in or boneless pork chop.

First of all, the size of the pork chop can vary a great deal from cut to cut. I’ve bought pork chops that are ¾-inch thick, and others that are almost 2-inches thick. Obviously the thicker ones take longer to cook.

Also, if you’ve got bone-in or boneless pork chops, that’s a factor, too. Bone-in pork chops cooking different than those without a bone. (And personally, I prefer the bone because it ads extra flavor.)

It’s WAY easier to just measure the internal temperature of a pork chop and cut out the guesswork.

The best tool to test the internal temperature of the pork chop is with is a probe thermometer. There are two kinds:

While the first kind is fine, I much prefer to use the second kind. These thermometers have a wire that runs from the probe, out of the oven, and to an alarm on the counter. It measures the meat temp constantly while it’s cooking, and you set the alarm to go off when the meat reaches a specific temperature.

Seriously, it’s a game changer if you’re at all distracted when you cook, or if you just don’t know how long to cook a pork chop. The timer will tell you EXACTLY when it’s done, so you don’t have to fuss, guess, or remember.
You also don’t have to keep opening and closing the oven to check the temp, which can make cooking take even longer.

You can get one of these thermometers for pretty cheap on Amazon or from Target. My preferred thermometer of choice is the ChefAlarm by Thermoworks, but Taylor also makes a decent one for $20 to $25 dollars.

You can also manually check the pork chop’s temperature using an instant read thermometer. I personally use one called a Thermapen (also by Thermoworks), but there are lots of brands out there that work as well. More about that below.

Another way to test how done your meat is… by touching it. This simple touch-test tutorial from the Exploratorium is really helpful for learning to gauge meat’s doneness by touch. 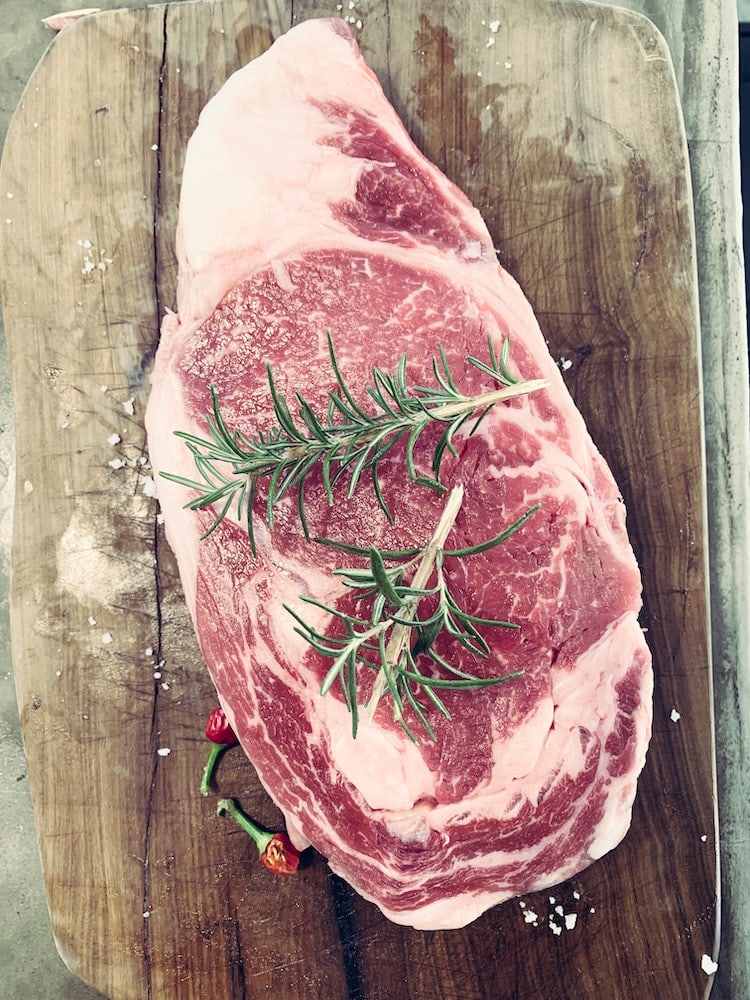 How to measure temperature?

One important thing you need to know is WHERE to insert the probe to take the temperature of a pork chop. You always want to insert the probe into the very middle part of the meat — we’re talking the center-most part, equal from top and bottom, side to side.

A lot of folks wonder, how long do I cook pork chops to kill the dreaded trichinella, e-coli, and other nasties? To kill these pathogens, pork must be cooked to at least 145°F (63°C).

The USDA recently lowered their advisory for safe pork cooking temperatures, so that means more tender pork for all of us. It used to be 160°F (71°C), which dried out pork pretty badly.

Trichinella is also killed when pork is frozen at -5°F (-20°C) for 25 days, or to -22°F (-30°C) for 25 hours. So you can keep than in mind if you’re freezing your pork before eating it — your freezer temperature can play a factor in how safe your meat is to eat. (Source: Center for Disease Control)

How long do I cook pork chops?

Another really important factor in cooking pork chops is carryover cooking. What does that mean? I’ll explain:

When you’re cooking meat and remove it from its heat source, the heat doesn’t immediately leave the meat. There’s a lot of heat energy still circulating in that meat, slowly penetrating until it reaches the middle.

This also means that the internal temperature of your pork chop will continue to rise after you’ve taken it out of the oven. This also goes for cooking anything… roasts, cakes, casseroles, you name it. EVERYTHING carryover cooks.

The carryover cooking time can vary depending on the size and consistency of what you’re cooking, but for your basic pork chop or steak, you can gauge that heat will continue to circulate through the chop for 5 to 7 minutes. It would be much longer for, say, a large roast.

If you don’t believe me, take your pork chop out of the oven and stick a probe thermometer in it and watch for the next 5 minutes. You’ll see the temperature climb another 5 to 7 degrees before it begins to cool. 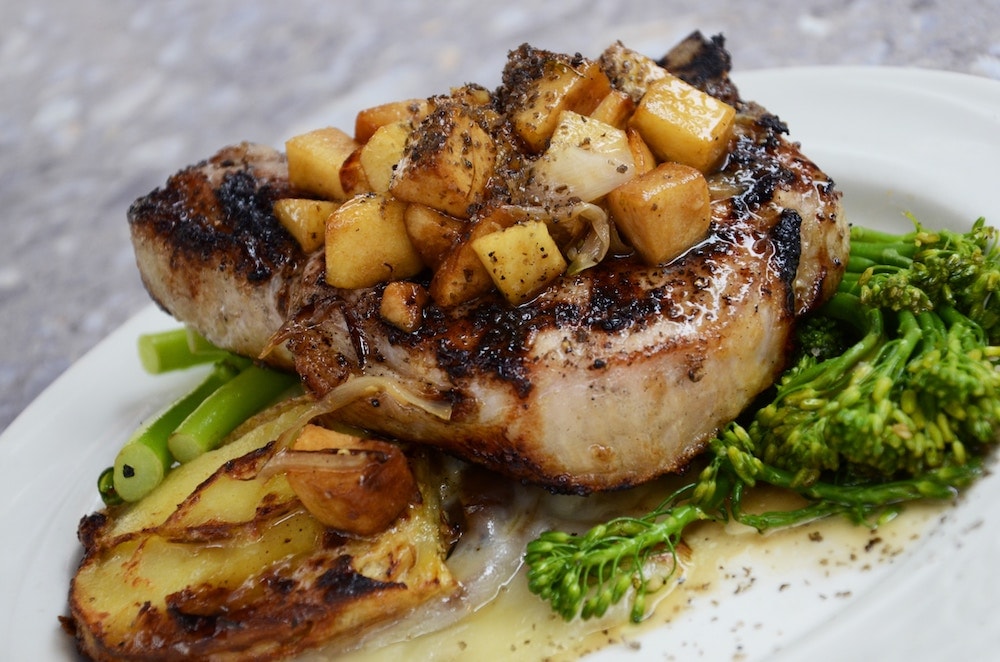 While you’re wondering how long you should cook your pork chops, there’s a second factor to keep in mind, and I can’t stress this enough.

Salt your pork chop (or pork loin, or whatever cut you’re cooking) 24 hours ahead of time.

Yes, you need to keep it in the fridge the entire time. Don’t let your pork sit at room temperature for hours. It will still go bad.

I’m not talking just a pinch of salt; sprinkle all sides of your chops with a fairly generous amount of salt.
You want to use more salt because it will penetrate the entire cut of meat, so you need enough to salt the entire internal mass of the pork chop evenly. You’re basically dry-brining your pork chops.

This goes for most cuts of meat: pork chops, pork roasts, pork tenderloins, beef steaks, beef roasts, chicken, all of them. Except fish, which is too delicate to salt that far ahead of time.

Also, another factor is that salt will also give you a little wiggle room in overcooking, because salted meat holds onto their moisture better. So if you overcook your pork chop just a touch, pre-salting can help keep its texture moist.

FYI, you don’t need to sprinkle with black pepper ahead of time. Just salt.

Tl;dr — why to salt ahead of time:

For those of you who scanned to the bottom of the page:

So make sure you salt your meat, which will make your job of cooking those chops easier (and more tasty in the end)!

What if you miss the 24-hour mark?

No problem. Here are some thoughts:

But still, shoot for at least 8 to 12 hours, minimum, ideally 24 hours. One great tip is to salt your meat as soon as you get it home from the store (unless you’re going to freeze it).

What if your pork chops are frozen?

Again, no problem! If you can get them defrosted about ⅓ of the way, you can salt them and the salt will penetrate as the meat defrosts.

To defrost your pork chops quickly, put them in a zip-lock bag (unless they’re already in plastic) and set the bag in a large bowl of room-temperature water. Run a small trickle of cool tap water into the bowl to keep the water moving.

After 30 minutes, the pork chops will be defrosted enough to salt. Just salt them, cover them with plastic, and put them in the fridge until you’re ready to cook them. Do not leave your pork sitting of the refrigerator for hours. This is unsafe. 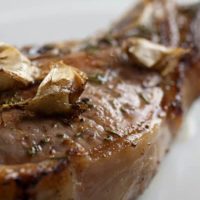 How Long Do I Cook Pork Chops?

It's super easy to cook perfectly moist, juicy pork chops with the USDA's *new* lower safe pork temperatures, which leaves them perfectly textured. So if you're wondering how long do I need to cook pork chops, keep an eye on the internal temperature above all else. I have all sorts of tips on cooking a perfect pork chop.
5 from 1 vote
Print Pin
Course: Entree
Cuisine: American
Keyword: how long do I cook pork chops, how to cook pork, how to know when pork is done, pork, pork chops, pork cooking temperature
Prep Time: 5 minutes
Cook Time: 20 minutes
Salting Time: 12 hours
Total Time: 25 minutes
Servings: 4
Calories: 264kcal
Author: Stephanie Stiavetti

I also have a great post here on how to roast a chicken to perfection, which is another question I get all the time, along with how to make the ultimate chicken soup.