You can learn to make clotted cream. Yes, seriously. And it’s not that hard! 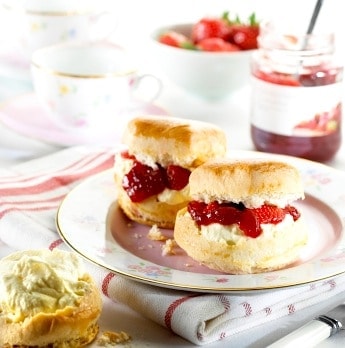 For the past few weeks, I’ve been showcasing the many ways that you can make clotted cream at home and not have to buy the icky pre-packaged stuff at the grocery store.

(I’ve also got a post here on how to make homemade cottage cheese from leftover buttermilk.)

While the clotted cream at your local supermarket isn’t all that bad – though it’s really expensive – nothing beats this luxurious spread when it’s made fresh, especially if you’re using the best fresh, organic cream you can find.

It also goes amazingly well with my morning baked oatmeal with blueberries and coconut.

Why not avoid that completely with what amounts to five minutes of actual work?

Today, we’re discussing the slow cooker method, which is probably the least labor intensive of all techniques.

Essentially, you put some cream in your slow cooker, turn it on, and walk away for eight hours.

The key to making clotted cream is maintaining a good surface-area to cream ratio.

In other words, you want to have as much of the heavy cream exposed to the air as possible, to maximize the amount of clotted cream you get in the end.

So, if you have a huge slow cooker, great! If you have a smaller slow cooker (like 3 quarts or less), you might consider halving the recipe for best results. 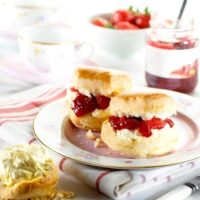 Learning how to make clotted cream in a slow cooker is easy and yields a lovely, luxurious cream to spread on English muffins with a little jam. Note: Some slow cookers run hotter than others, so you may find that your particular model cooks faster or slower than what I allow for below. I recommend checking your cream every 2 hours to see how it’s looking, then leave me a comment here so I can track how long everyone’s individual cookers take to make clotted cream.
4 from 3 votes
Print Pin
Course: Breakfast
Cuisine: British
Prep Time: 1 minute
Cook Time: 1 day
Total Time: 1 day 1 minute
Servings: 4
Calories: 821kcal
Author: Stephanie Stiavetti

IMPORTANT: There is a variance in slow cookers and how hot they get, even between individual examples of the same brand and model. If your slow cooker gets too hot and scorches your cream, you may want to use a water bath method. To do this, pour the cream in a wide, open dish that fits into the vessel of your slow cooker and set it inside. Fill the cooker with about an inch of water that surrounds the dish with the cream. This water will act as a buffer between your too-hot slow cooker and the your would-be clotted cream.