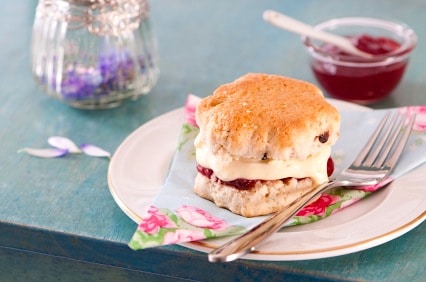 Is there such a thing as a quick and easy Devonshire cream recipe? This summer I’ve written a ton of posts on making Devonshire cream – also known as clotted cream – and while all have been super easy, none have been quick. What can I say? It’s a slow process, and good things come to those who wait. A lot like this gorgeously puffy soufflé pancake with fresh fruit.

But, if you need something now, waiting eight hours for your clotted cream isn’t really going to cut it. Sure, you can head down to the grocery store and buy some of the prefab stuff off the shelf, but there’s an option for making something similar to Devonshire cream that will work in a pinch. I’d recommend using this recipe if an army of old British ladies show up at your house, demanding afternoon tea on a moment’s notice. I’d qualify that as a genuine tea emergency.

And for what it’s worth, this cheater’s clotted cream makes a great filling for French macarons (which are not the same thing as macaroons – more details on the difference between macarons and macaroons here).

I want to make it clear that this recipe will not give you authentic Devonshire clotted cream – it will, however, give you a soft, creamy, gently-sweet spread that tastes delicious on scones, fruit, sourdough bread, or whatever you like. If you’re looking for the real thing, you’ll want to go with the more effective and time-intensive methods, of which you have many options. Here’s what we’ve discussed so far: 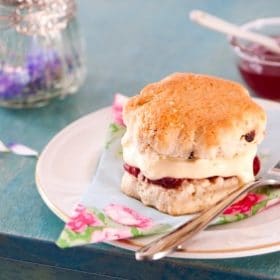