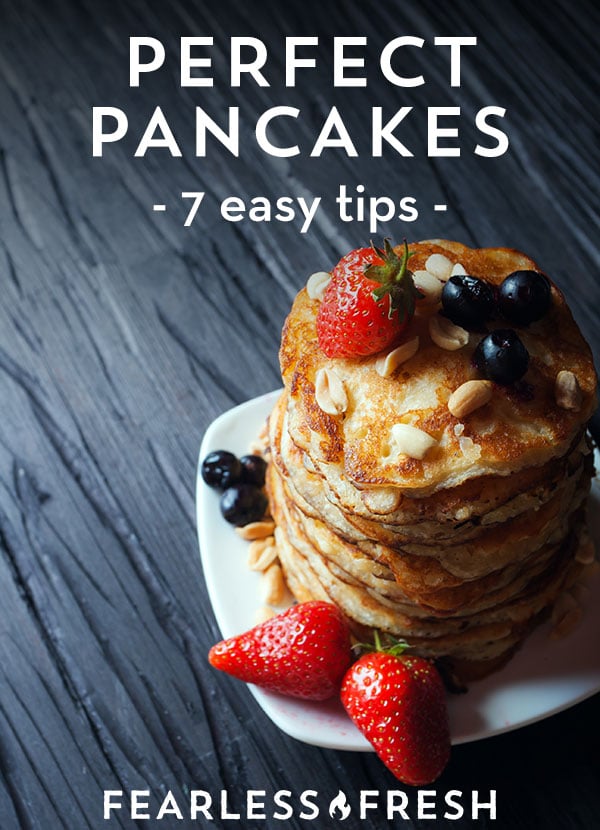 Although we might think that perfect pancakes from scratch are super easy to make, they can still be a challenge. In fact, some folks are seriously pancake-averse because they find them so difficult to make. But now’s your change to change that! Perfect your pancake A-game with these tips for making a stack of golden, fluffy, restaurant-quality pancakes.

8 Tips for Perfect Pancakes from Scratch

1. Use extra vanilla + an extra pinch of salt

If you feel that your pancakes are bland, you can bump up their flavor by increasing the amount of vanilla and/or salt. Both will “wake up” the flavor of your soon-to-be perfect pancakes. Or, think of other interesting flavors you can add, like cinnamon or lemon zest! Pure vanilla beans also pack a lot of flavor. You can do this while making pancakes from scratch, but you can also try this trick on packaged mix!

Using a wire whisk to mix your pancakes will whip the batter far better than using a spoon. A wire whisk makes the batter nice and smooth, while also incorporating air bubbles which will help make the pancakes super fluffy. Think about how whipping egg whites create a fluffy meringue — lots of air!

Adding a carbonated liquid to your pancake batter will give you the fluffiest, most perfect pancakes ever. Replace all or part of the milk with seltzer, club soda, ginger ale, or even beer. (Yup, good ol regular beer, not root beer!) While club soda won’t add flavor, it will make your pancakes extremely fluffy. If you would prefer more interesting pancakes from scratch, try adding lemon-lime soda. This is an old trick my mama used to use.

PROTIP: If you want your perfect pancakes to stay light and fluffy, follow my 10-stroke rule. Whip the batter only 10 times. Make sure the batter is mixed, but just barely. You will more than likely have a few lumps, but that’s okay. Over-mixing the batter will leave them as flat as a pancake! (Bad pun I know, lol) This is because over-mixing causes the gluten in the batter to form, which makes them tough and dense.

Test for yourself! If you look at your pancakes and think they look lumpy, do a mix test. Split the batter in half, whisking the first half only the recommended 10 times. Then mix the second half it until all the lumps are gone and all the batter is perfectly smooth. Cook both halves separately and set the pancakes side by side. You will be amazed at the difference in fluffiness!

This is another great little trick for deliciously fluffy pancakes from scratch. Separate the yolks from the whites and add them to the batter separately. The yolks can be added directly to the batter, with the rest of the ingredients. Then add the whites a little differently.

In a separate bowl, beat those egg whites until they have reached firm, stiff peaks (I suggest using a stand mixer or hand mixer). If you are unsure at what consistency the stiff peaks need to be, you will know they are ready if you can lift the beaters and the egg white keep their point without dripping or sagging. Next, gently fold the egg whites into the batter right before you are cooking to cook the pancakes. Make sure to gently fold them in, or you’ll flatten the whites and your pancakes will be equally flat.

Don’t have any buttermilk? Or are you tired of buying a quart of buttermilk, just to have it go bad a week later? No problem. Instead, use a 50/50 ratio of sour cream and milk. You can also make your own buttermilk by mixing 1 cup of milk and 1 tablespoon of white vinegar. Let it sit for a few minutes until it starts to curdle. It won’t look pretty but it will still make your perfect pancakes taste great!

7. Don’t press down or they will deflate

Another reason some peoples’ pancakes are always flat is because they press down on them with the spatula after flipping them over. Don’t do that! Pressing down on your pancakes obviously squishes them, flattening the air bubbles you so carefully added. Pressing on your pancakes will cause you to lose their fluff. D’oh! RESIST THE URGE!!

Make yourself a small, single pancake before you cook the rest of the batch, then taste it. This will help remind you of any ingredients you may have forgotten. (Like salt. Ahem.) It also lets you test out the temperature of the pan. A pancake pan can’t be too hot, because then they will overcook, and if the pan is too cool, your pancakes will end up gummy instead of fluffy. The pan needs to be the perfect temperature and making that test pancake will allow you to test without ruining the whole batch!

Follow these steps and your perfect pancakes from scratch will be so fluffy & airy, they just might float off your plate!

Laurie is a self taught cook, baker, food blogger, and former caterer and restaurant owner. She loves cooking for her family, friends, and two best pals (Cali & Sheila – her dogs). You can find Laurie over at Drizzled with Flavor.

Previous Post: « Cooking Knives: Knife Skills — The Bare Basics
Next Post: How to Make Scones and Why They’re Weirder than Biscuits »