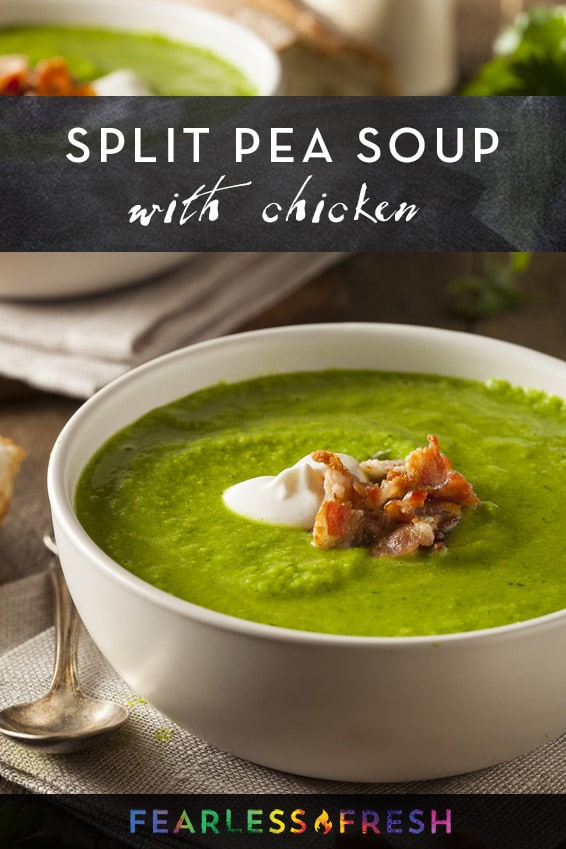 – This recipe for split pea soup has a special twist – chicken! –

During the winter, there’s a special place in my heart for soup — especially my favorite, a recipe for split pea soup. I love soup that’s thick, almost porridge-like in its texture, and feels comforting and creamy even if there’s no dairy involved. (Both my vegetarian congee recipe and super-comforting potato curry soup fit the bill here.)

I’ve made split pea soup so many times I can’t count, and I usually make it with a ham hock because… well, that’s just how I’ve always done it. It’s delicious that way, so no complaints there.

But recently I had one of those must soup now moments, being wintertime and all, where nothing would quell the urge to face plant into a bowl of hot, steamy split pea soup.  I found my freezer woefully devoid of smoked ham hocks and chicken stock (sad panda ??), yet rife with what appeared to be a metric f**k-ton of whole chickens. A cursory glance at the fridge yielded a few slices of bacon of unknown age. (And hey, bacon is immortal, right?)

There was a winter storm raging through the area that day, so I opted to work with what I had.

A recipe for split pea soup with… chicken?

So here’s there thing about making split pea soup: It’s flexible. Purists might argue that split pea soup should not be messed with, but I’m all about making do with what you’ve got. If you get a little creative — or you haven’t been to the grocery store in a while — you can make split pea soup with all sorts of different ingredients. You can use whatever stock you’ve got handy, or even lightly salted water in a pinch. You can leave the meat out and add deeply sautéed mushroom instead. You can swap out the very thing this soup is named for – split peas – and use lentils, yellow peas, chickpeas, or even the random mixed-bean blend that’s your mom left in your cabinet last year.

(A note if you decide to use other beans: The bigger and older the beans, the longer they’ll need to cook. You may also want to soak them overnight first, if they’re particularly mature. I have a whole post on how to work with dried beans with more details.)

Given all of this, using chicken in a recipe for split pea soup makes sense. Incredibly delicious sense.

I ended up using the whole chicken to make the stock, which conveniently cooked the chicken as well, so all I had to do was remove it from the bones and add it to the soup a little later. Easy! Then I cooked the bacon down and used the fat to brown the onion and veggies (because, bacon), and saved the leftover bacon bits to sprinkle on top of the soup once I’d ladled it into bowls.

I have to say, I may never make a recipe for split pea soup without chicken again. The shredded chicken adds something beautiful to this soup, a lightly sweet flavor that doesn’t compete with the smoke usually provided by the ham hocks. (Though the bacon adds just a hint of smokiness, which is nice.) The texture is spot-on, and honestly, I think this soup recipe is one of the most comforting things I’ve eaten all year. Definitely a keeper.

You can easily make the stock for this soup the day before, and just stick both the broth and the meat in the fridge until you’re ready to use it. Even the soup froze well, so if you’ve got a bunch left over, do yourself a favor and freeze it in single-serving containers so you have an amazing dinner waiting the next time you don’t want t cook after a really lousy day.

And if you’re looking for something a little less winter-y but just as comforting, check out this Thai coconut soup with sweet potatoes. It’s sweet, creamy, and warming, and totally vegan if you want it to be. 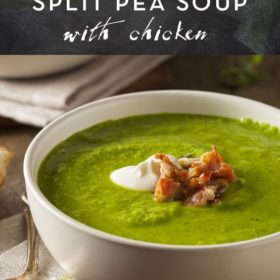 My Best Recipe for Split Pea Soup with Chicken

I have to say, I may never make recipe for split pea soup without chicken again. The shredded chicken adds something beautiful to this soup, a lightly sweet flavor that doesn't compete with the smoke usually provided by the ham hocks. (Though the bacon adds just a hint of smokiness, which is nice.) The texture is spot-on, and honestly, I think this soup recipe is one of the most comforting things I've eaten all year. Definitely a keeper.
0 from 0 votes
Print Pin
Course: Soup
Cuisine: Italian
Prep Time: 15 minutes
Cook Time: 3 hours
Total Time: 3 hours 15 minutes
Servings: 8
Calories: 554kcal
Author: Stephanie Stiavetti

You can easily make the stock for this soup the day before, and just stick both the broth and the meat in the fridge until you're ready to use it. This soup freezes wonderfully, so if you've got a bunch left over, seal well and freeze for up to three months.